Why are they critically endangered?

You are here: Home1 / Explore2 / Why are they critically endangered?

What is the Western Swamp Tortoise and why is it endangered?

The Western Swamp Tortoise is one of the most critically endangered tortoises in Australia. There are less than 50 adult tortoises living in the wild, in two sites in the Swan Valley; Twin Swamps and Ellen Brook Nature Reserves. It is primarily endangered because of

Loss of habitat is historically one of the main causes of endangerment. Western Swamp Tortoises are very specific in their habitat needs, requiring ephemeral swamps with a clay base. These wetlands were used in the early days of settlement for making bricks for homes. Later, expansion of the Perth metropolitan area encroached on western swamp tortoise habitat, and new developments, such as Ellenbrook, squeezed the reptiles into increasingly smaller spaces.

In two reserves in the Swan Valley, tortoises are protected by an electric fence to keep predators out. Foxes and feral cats, which eat the tortoise, have caused a major decline in the number of tortoises. There are also native animals that eat the tortoise including ravens, goannas and birds of prey.

Most females lay only 2 or 3 eggs if the climatic conditions are appropriate. In the wild, females may be 8 to 15 years old before they begin to breed, but may continue breeding until well into their sixties. Hatchlings are only the size of a ten cent coin, and are subject to predation due to their size. Juveniles bred at the Perth Zoo Captive Breeding Program are not released into the wild until they attain 100g of weight (usually 2 to 3 years old). 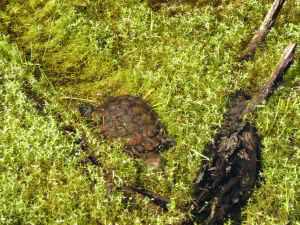 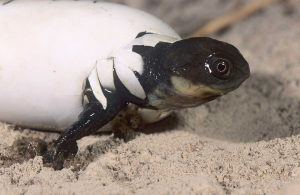 Releasing into the wild 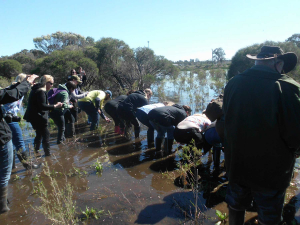